The NFL coverage map is here for Week 13 games. Amazon Prime is back with their Thursday night game after a short turkey day hiatus while CBS gets the doubleheader over FOX in what should be a great week of professional football.

The folks at 506 Sports provide this week’s NFL TV and coverage map. The color codes and what games they correspond to are listed below.

Listings include FOX, CBS, NFL Network, and prime-time games on NBC and ESPN. These maps are subject to change throughout the week. For the Thanksgiving Slate, scroll to the bottom of the article for more information. 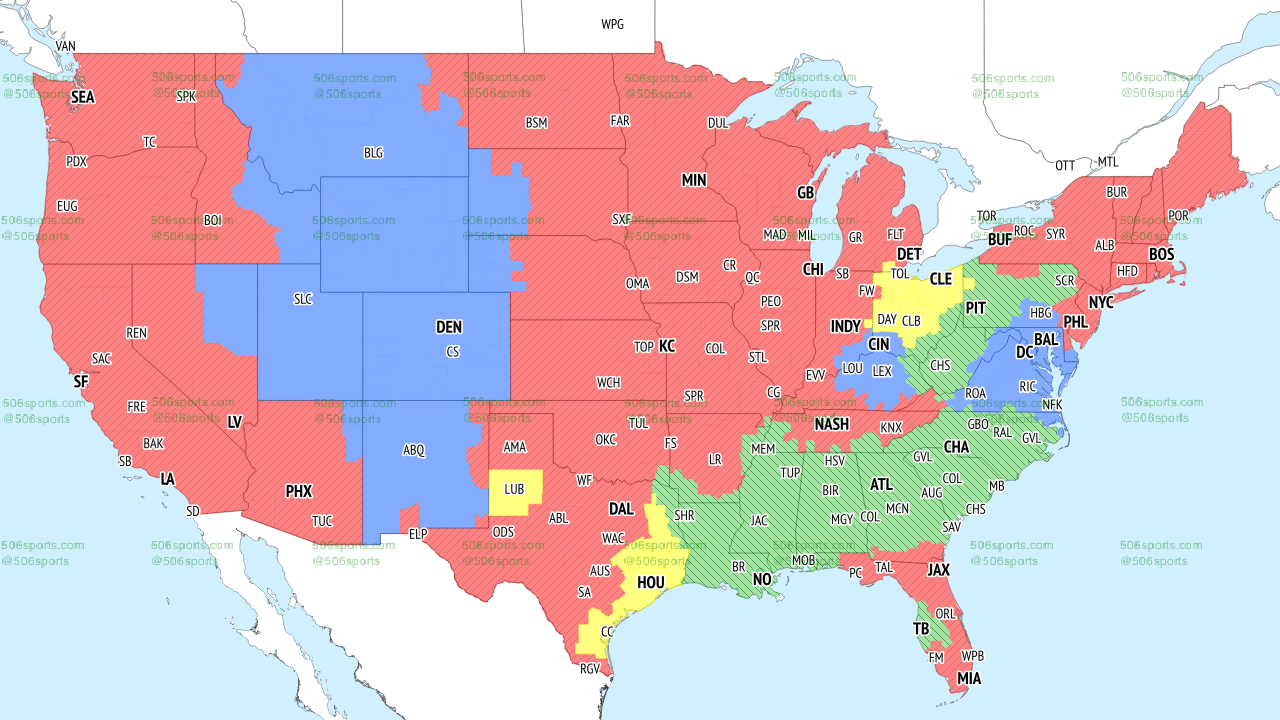 The Jets looked like a completely different team with Mike White under center last week. Head Coach Robert Saleh will keep White on the field with a trip to visit the 9-2 Vikings, who have an opportunity to clinch the NFC North division with a win and some help this week.

Nobody is finding an easier way to lose games this year than the Baltimore Ravens. If they really want to impress fans, they’ll find a way to lose to the Broncos and Russell Wilson, who still has fewer touchdowns on the season than he does bathrooms in his house.

This matchup will be centered around Deshaun Watson’s return from suspension, returning to Houston, to face his former team. We can anticipate both the Texans players and fans will make it as tough of a debut as he’ll ever face.

The Steelers squeaked out a win on Monday night against a struggling Colts team while the Falcons lost a close one to a thriving Commanders team. The Falcons have an opportunity for postseason play, but it’s unlikely for either team to make a late run. 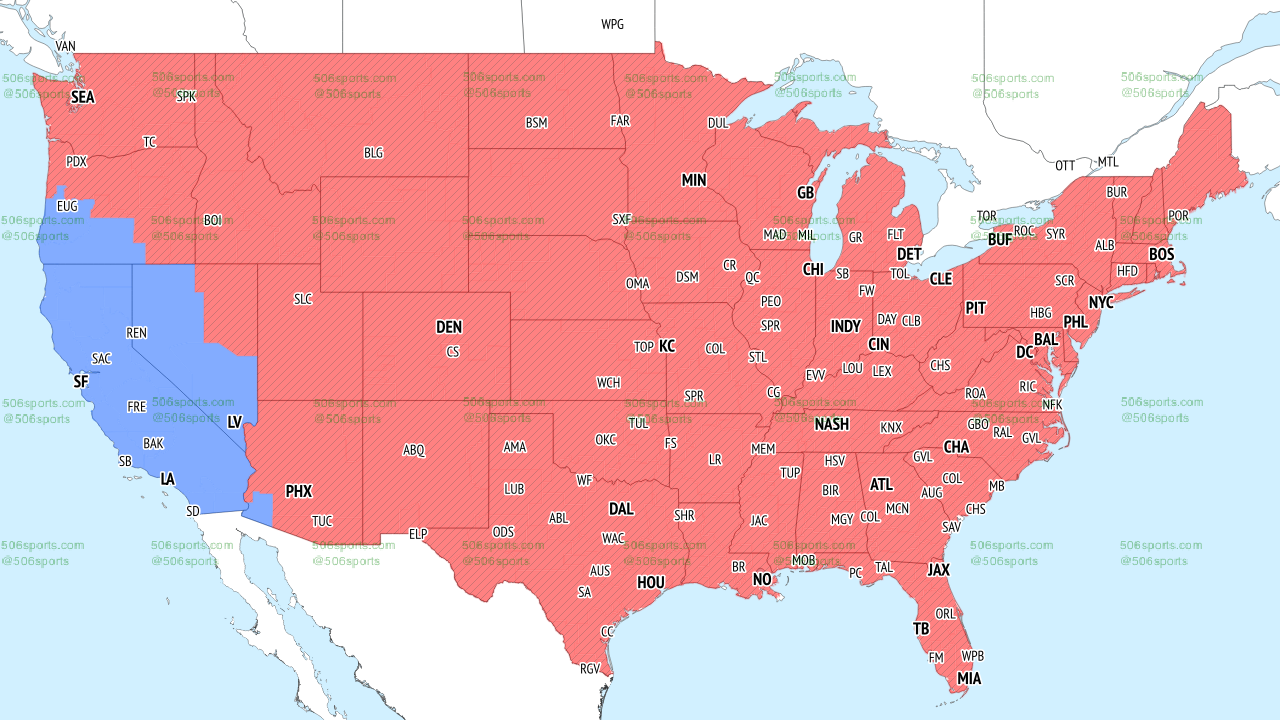 Deservedly so, the Chiefs have another Game of the Week on tap with their matchup against the Bengals in the late CBS window this Sunday. This could very well be a preview of a playoff matchup, much like it was last year. If you don’t have CBS, you can catch the game by signing up for Paramount+.

The Chargers avoided overtime by going for two to beat the Cardinals on Sunday while the Raiders needed overtime to beat the Seahawks. Looking at both teams, you can expect fireworks on the offensive side of the ball with the over/under currently set at 50.5 on the Barstool Sportsbook. 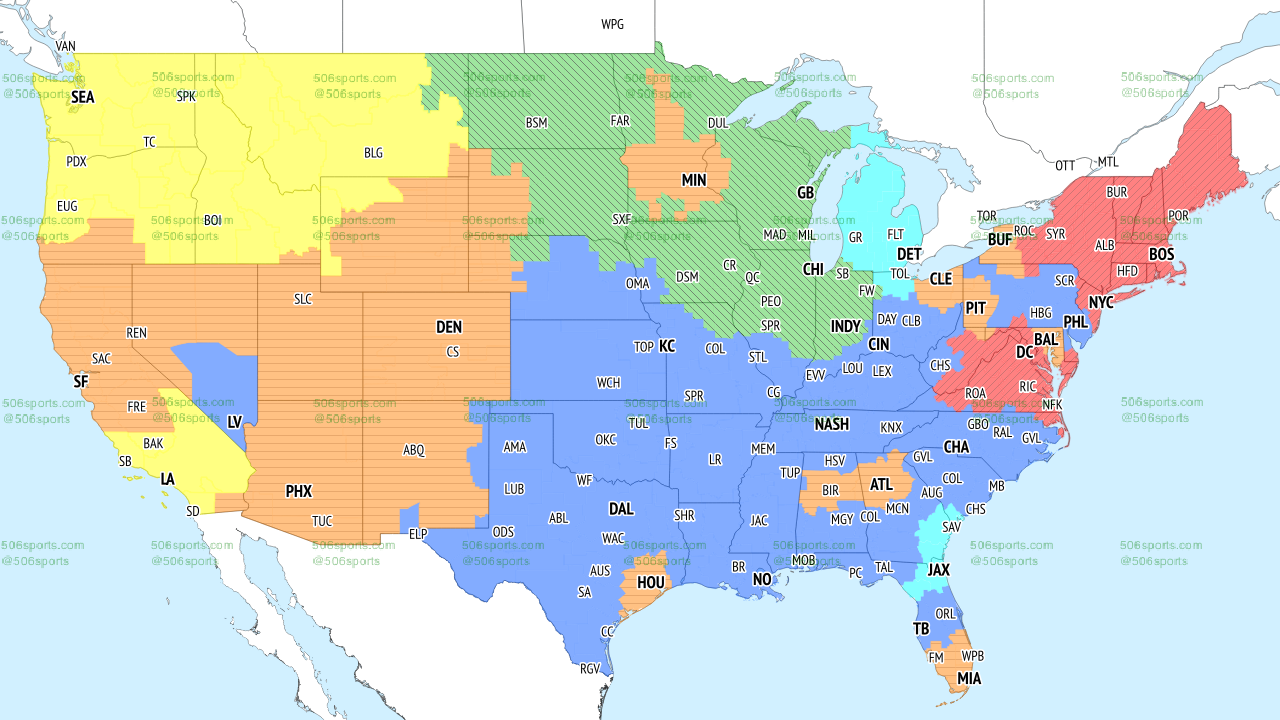 It may not be sexy, but this could easily be an early Super Bowl matchup taking place in FOX’s early window. Unfortunately not enough around the country will get to watch, but if you’re located in the red areas on the map above, you’re in for a treat.

If you asked yourself in Week 1 if the Commanders vs. Giants matchup in Week 13 would mean anything, what’d you say? Both teams are holding down an NFC Wild Card spot this late in the season, and (almost) everything is on the line this week. Luckily, there’s not a lot of competition on their heels, but a win would go a long way.

Aaron Rodgers has a 23-5 record over the Bears in his career. Will this be his final matchup against his NFC North foe? If you find yourself in the green area on the coverage map this week it may be worth tuning in to watch, and you can do so by signing up for FuboTV.

Both the Jaguars and Lions have played solid football as of late. But late is the keyword in each team’s season, with the playoffs just around the corner and they both sit three games back from the Wild Card in their respective conferences. Still, fans are holding out hope for a miracle run to the playoffs before turning their attention to simulating their 2023 NFL Draft class.

Is anyone down as bad as the Rams? No Cooper Kupp, no Aaron Donald, maybe no Matt Stafford? Regardless, they’re all but eliminated from postseason contention and looking ahead to 2023. Meanwhile, the Seahawks lost at home last week and now find themselves on the outside looking in. It’s a must-win game this week.

As long as the Dolphins keep winning, they’ll hold the tiebreaker over the Bills. But this week the road gets tougher, traveling across the country to face a 49ers squad that’s found their identity. Mike McDaniel’s return to the Bay Area to face his former boss, with all that’s on the line, will make this easily one of the top games to watch in Week 13.

The Bills have bounced back after a couple of wins over the Browns and Lions but the test gets slightly tougher this week as they travel to face the Patriots. New England needs to win to keep within spitting distance of the AFC playoff race, while Buffalo needs to win to keep up with Miami for the AFC East lead.

We’re happy the NFL flexed the Broncos out of the Sunday night game in Week 14, but they really left us hanging with the Colts this week. Currently favored by 11 points on the DraftKings Sportsbook, Dallas should be able to control this matchup from start to finish.

How bad is it in the NFC South this season? The Tom Brady-led Buccaneers currently hold the first spot in the division with a sub-.500 record. The Saints, who sit at 4-8, are only one win from matching the Buccaneers’ total. No one is excited for bad football, but it’ll be an intriguing storyline to follow throughout the month of December.