Week 11 is in the books, and it’s time to provide my quarterback passing locations charting for the game and the regular season thus far. In case you missed the previous articles, I will be charting, visualizing, and providing takeaways for the all-important quarterback position for the Pittsburgh Steelers. Thanks to Thomas Mock for his great article that helped me learn much of what I’m using today. Couple notes before we jump in. All yardage referenced are air yards from the line of scrimmage and bats at the line of scrimmage, spikes, and clear throwaways removed. This week’s charting has a whopping four throwaways removed, which matched his total last week as well.

Quarterback Kenny Pickett’s sixth start was one filled with ups and downs, a tale of two halfs. He played well overall in the first half, contributing to Pittsburgh’s 23 points, tying their highest game total which came in the first matchup in the season opener, where the team needed overtime to accomplish this. His one touchdown was to wide receiver George Pickens, getting wide open on a corner route to waltz in for the score. He also did well eluding plenty of pressure in this game, sacked only twice compared to six in the prior two games. A tendency I noticed more and enjoyed was aligning three receivers to one side, creating space and throwing to the middle route with the above as a prime example. Pickett thankfully did not have an interception, but noted four near interceptions highlighting the luckiness and need for improvement in decision making and accuracy still. While inconsistent still early in his career, we’re starting to see him target more areas of the field overall, particularly in pass distances.

Speaking of which, let’s start with a simple view of the 37 charted passes, with number of throws and pass distances for week 11: 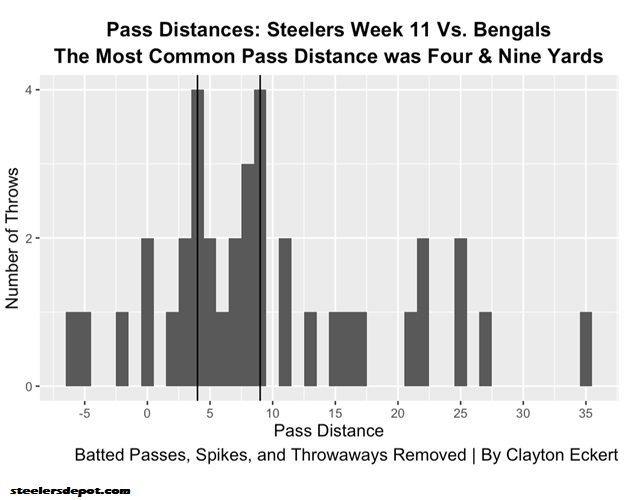 The most common pass distance was 5-10 yards for the second consecutive game at 32.4% (34.6% in week ten), highlighting the positive trend of targeting a bit more downfield as I eluded too earlier. There were a lot of routine throws that he connected on (stops, outs, etc.), but wanted to point out a couple other plays. One was a third down fail in the first quarter, on a good back shoulder throw to running back Najee Harris on the wheel route, but was unable to secure it with very good coverage from the edge rusher on the third down fail. The final play of the game was a low-light, a poor decision to throw over the middle into double coverage for his fourth near interception, though wide receiver Gunner Olszewski showed great effort to make the catch off the deflection just short of the end zone.

0-5 yard passes had been the most common for much of the season, now the second most common at 29.7% compared to 26.9% last game. One early in the game went for a third down conversion, where Pickett kept his eyes downfield as he stepped up to elude the free rusher, finding running back Jaylen Warren from the slot on an out route and necessary YAC. An inaccurate throw in this range was to wide receiver Diontae Johnson (another quiet game), who ran an in route with the throw terribly low at his feet on a third down fail.18.9% of passes were explosive (15.4% in week ten), an expected increase in any game you’re trailing, for the third most common distance for the game. One of the late game examples was on his next to last pass of the game, where Pickett did a great job eluding between two defenders to find Olszewski who found a soft spot in the zone along with YAC for 31 yards. On one early in the game, he dropped a dime to Pickens on a crosser despite being hit as he threw for a 22-yard gain.

Uptick in 10-15 yard passes to 10.8% compared to 7.7% last game, when it was the least common distance. Struggles with accuracy in the intermediate range continue though, with a couple thrown behind, one on a post to Pickens and the other a missed opportunity in the red zone to tight end Pat Freiermuth over the middle wide open. 15-20 yard passes tied for the least common distance this week at 8.1%, down from 11.5% in week ten. An enjoyable play was just before halftime, where Pickett stepped up in the pocket and found Freiermuth who got vertical, then settled on the intermediate stop route at 15 yards and provided grown man YAC through the defense. While a touchdown drive would have been ideal here, it set up an easier field goal for the lead going into the locker room. The two incompletions in this range were well covered, one on a third down fail. Behind the line throws tied for the least common pass distance (8.1%), a large decrease from 24.3 and 19.2 the previous two games. Unsuccesful on a flip pass and two screens, with one of the latter going to Johnson who ran right into a defender and barely getting past the line of scrimmage.

Here are the dots for the charted throws for week 11 as we add more context: 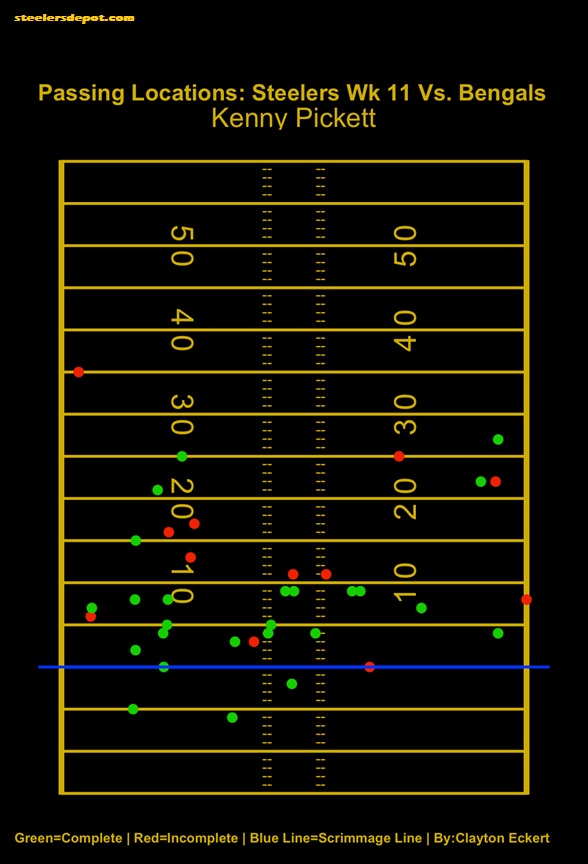 Large trends are continuing, starting with Pickett excelling at ten yards or less (20/24, 83.3%). Only 1/6 (16.7%) in the intermediate range really stands out, with four of the incompletions having accuracy issues. Pickett highly favored the left side of the field, particularly in the first half, and more throws on or between the hashes (eight) compared to two last game. Noticing him throw less to the immediate sidelines the past couple games as well. Better success in explosives this week, going 4/7 (57.1%). My favorite was also the most painful, an amazing 35-yard throw (longest of the game) to Pickens down the sideline where only he could get it, stacking the defender on the go ball that went off his hands for the would-be touchdown. The other two incompletions were overthrown, one to tight end Zach Gentry in the end zone that thankfully wasn’t picked. Pickett and Pickens did connect on the longest gain of the game (33) on a great throw and catch down the right side, fighting for five added YAC in the process.

Now for the heat maps, first with all the charted passes for the game, then completions only: 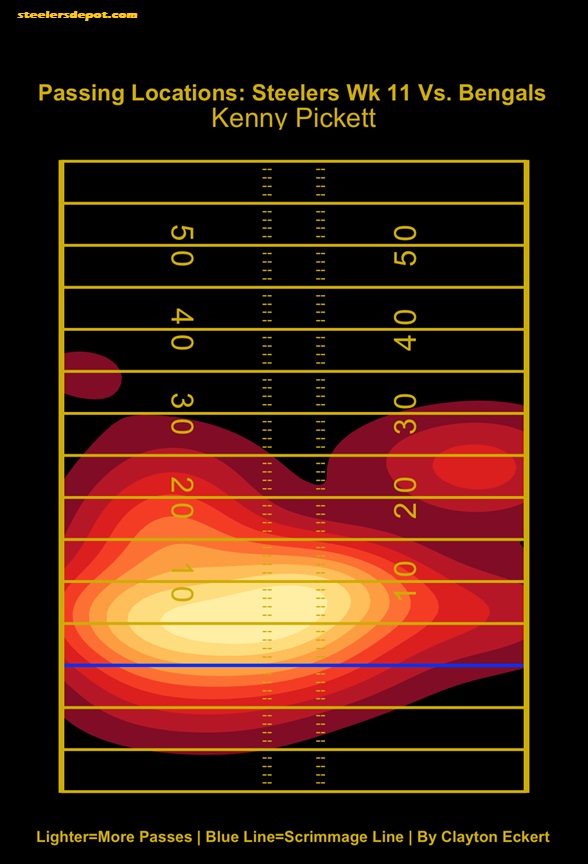 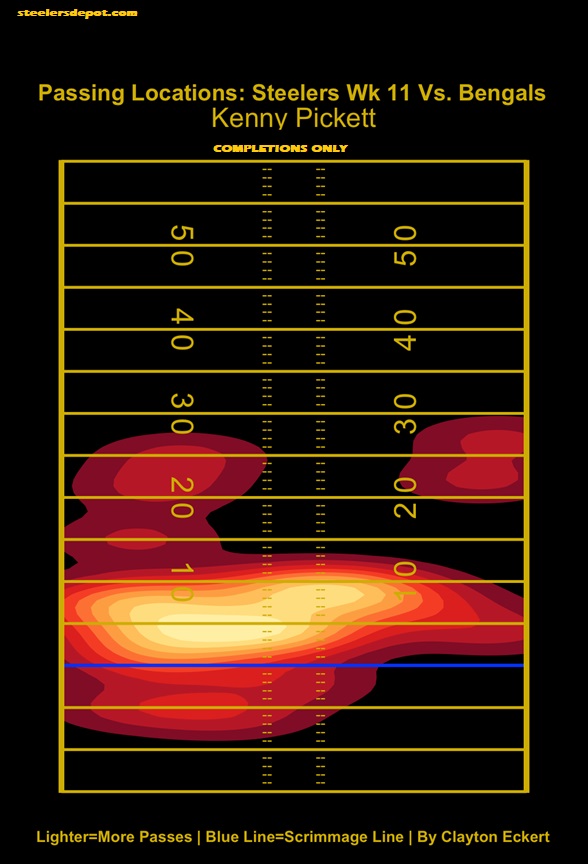 Stronger overall charts this week, especially with the all throws view where we can see 3-9 yard passes from the right hash to the left numbers as the most common area. So, more depth and middle of the field throws. The latter is more in the short range as we can see from the completions only view, where 3-6 yards from the middle to left numbers were the most completed areas and the disappearance we’ve grown accustomed to in the intermediate and deep middle.

Now let’s look at the 340 charted throws on the season for Pickett and quarterback Mitch Trubisky: 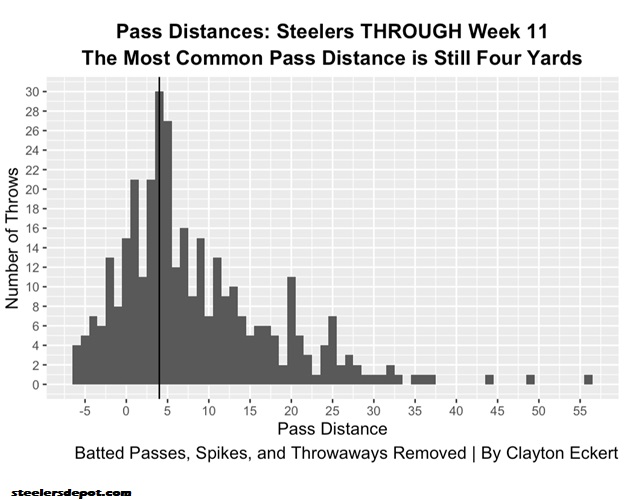 0-5 yards is still the most common on the season at 36.8% but dropping as of late from a previous average of 37.6%. One factor is the rise of 0-5 yard passes becoming the most frequent recently, now at 25.3% and has raise nearly a point the last two games. Slight drop for 10-15 yarders at 15%, dropping half a point from last week’s average. 14.7% explosive now, which increased half a percentage point. 12.6% behind the line now, which dropped for the first time in a while by 0.6 following a steady increase for several weeks. 15-20 yards is still the least common distance at 10.3%, dropping a bit after increasing the prior two games. 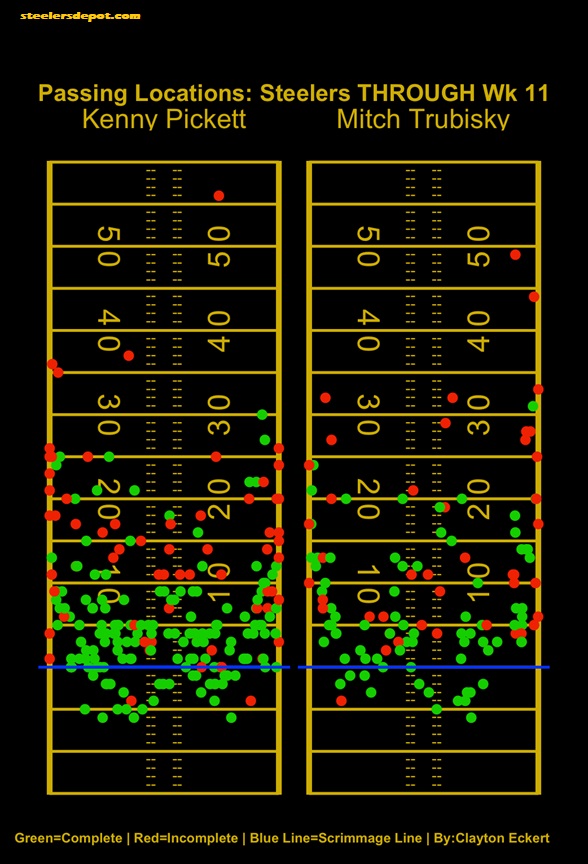 To close, here are the season heat maps of all attempts, completions only, and a pass locations comparison for the quarterbacks on all charted throws for the season: 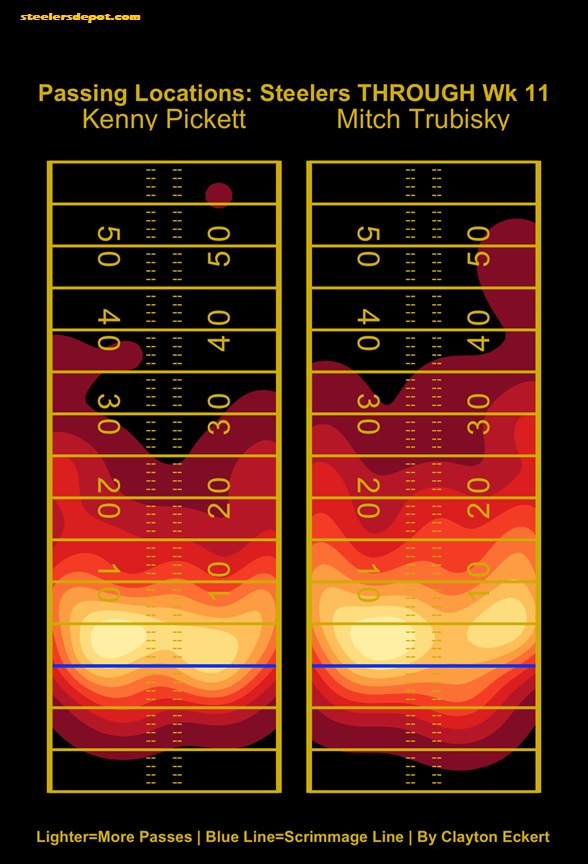 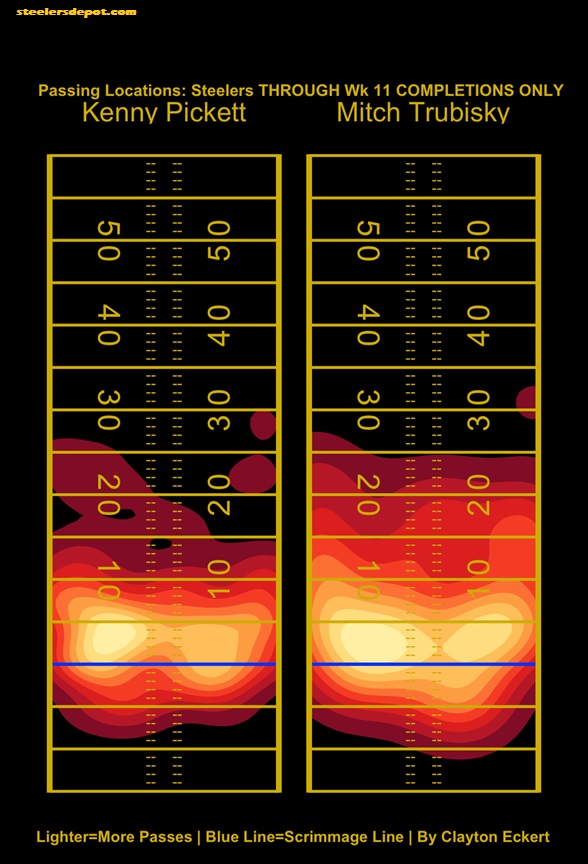 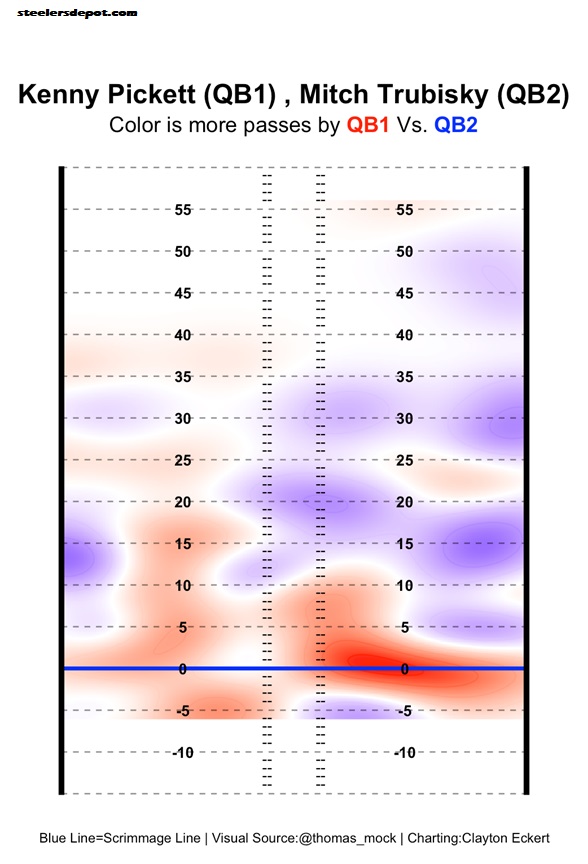 What are your thoughts of Pickett’s performance against the Bengals? What about how the Steelers quarterbacks have compared to date? Thanks for reading and let me know your thoughts in the comments!

What Channel Is the 2023 East-West Shrine Bowl On?