Fantasy football is more than just the weekly head-to-head games we’ve all grown to love. On Underdog, fantasy managers can put their player-projection skills to the test by predicting player stat lines. Here are my top Underdog Pick’em plays for the Monday Night Football Pick’em contest.

Underdog Pick’ems allows fantasy managers to predict stat lines and fantasy-point totals for almost all fantasy-relevant players. You can make two picks that pay out 3x even money or add more selections to your entry for higher payouts.

The levels are 3x, 6x, 10x, and 20x, progressing with each additional pick’em you add to your entry. Let’s take a look at this week’s NFL pick’ems.

When looking at fantasy-point projections, my first thought is always, “How does he get there?” For Matt Ryan, I think he needs two touchdowns. And even that might not be enough.

If Ryan throws for 200 yards and two touchdowns, he will fall just short of this projection. That also assumes he doesn’t turn it over. Ryan can also stay below 14.55 fantasy points by throwing just a single touchdown (or none) or having a lackluster night through the air.

The Steelers are admittedly a favorable matchup. They allow 20.2 fantasy points per game to quarterbacks. I’m going against the grain here and banking on Jonathan Taylor rushing for a touchdown or two, limiting what Ryan does through the air.

Well, if I think Ryan is going to struggle from a fantasy perspective because Taylor takes the touchdowns, it stands to reason I like Taylor to go higher than his projection.

After finally shaking his lingering ankle sprain, Taylor has looked fully healthy over his past two games. He’s scored 24.3 and 16.4 fantasy points, respectively, in those two contests.

The Steelers allow 22.9 ppg to opposing running backs. They’re definitely more of a pass-funnel defense, but I’m expecting the Colts to run the ball near the goal line and for JT to punch in one or two short ones. One touchdown will make it reasonably easy for him to surpass this projection. Two will make it a lock.

When in doubt, take a rookie quarterback playing under the bright lights to turn it over against a tough pass defense.

The Colts would definitely qualify as a run-funnel defense. They allow just 194.2 passing yards per game.

Additionally, Kenny Pickett already has thrown eight interceptions on the season. In his defense, he’s gone two straight games without one. I’m willing to bank on the fact that he won’t make it three.

The only hiccup in this plan is the Colts have only forced four interceptions on the season. With that said, I have a feeling this game may be higher scoring than expected.

Pickett attempted 42 passes against the Bengals last week and managed to avoid turning it over. If he has to throw another 35+ tonight, I would be surprised if he didn’t make a mistake. 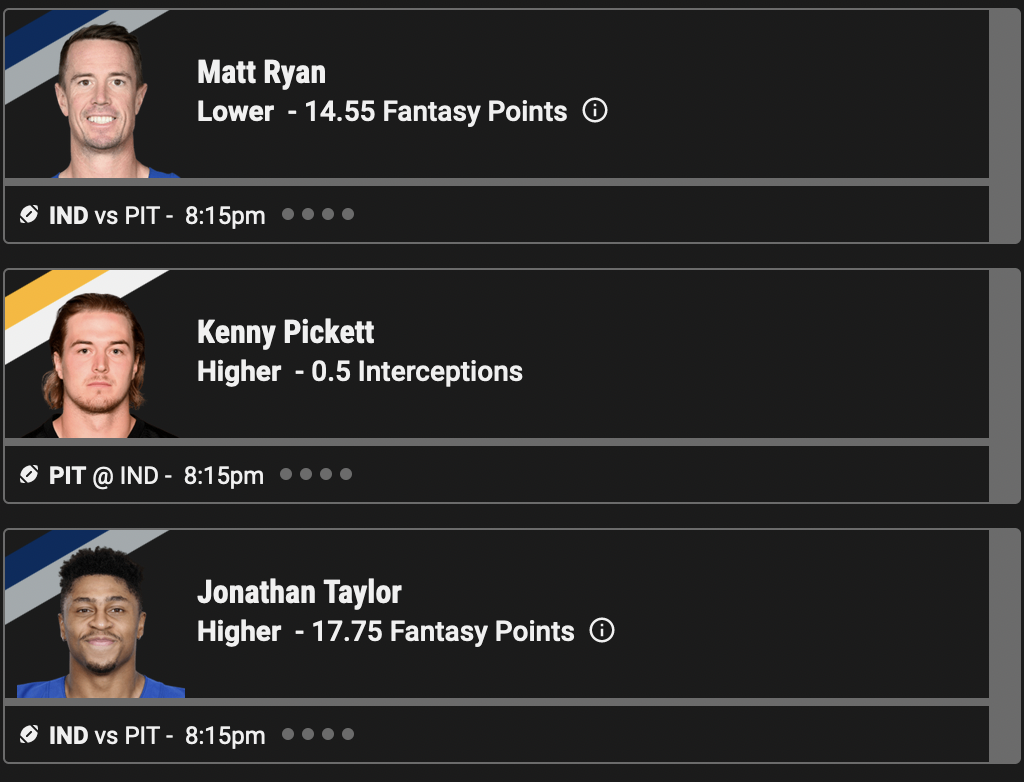 ‘We Can Win With Him:’ Art Rooney Expects Mitch Trubisky To Be…

‘We Can Win With Him:’ Art Rooney…