Film Room: A Deeper Look at the Pickett to Pickens Game-Winner


Steelers fans had to wait a while on a frigid Christmas Eve night for their team’s first lead and touchdown of the game, but I’m sure if you ask any of them it was well worth it. Directly after a 4th and 1 QB sneak that required a strong second effort from rookie Quarterback Kenny Pickett to pick up the conversion, the Steelers went to the air for the kill. Pickett was able to connect with his fellow rookie Wide Receiver, George Pickens, with a 14-yard scoring strike.

While it looked like a relatively easy pitch and catch for the two young guns, that’s rarely the case with any football play, especially in the NFL. 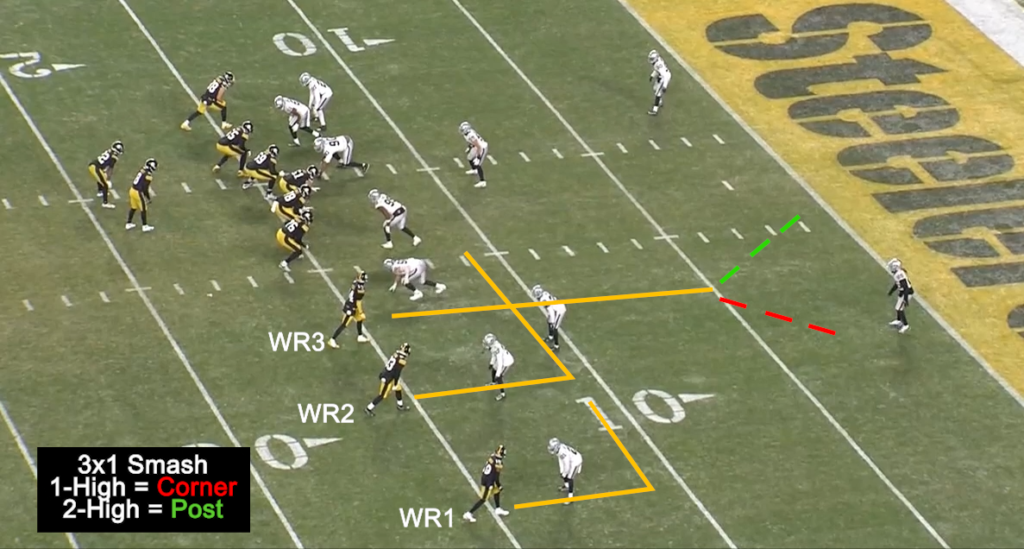 As you may remember, Pickens doesn’t run a corner route on the play. While it’s possible it was a “built-in” call for Pickens to run a post, the majority of routes run in the slot are dependent on the defense’s coverage. This is likely no different.

You don’t want your slot receiver running directly into coverage when he has a two-way go on the inside.

Therefore, the WR3 on this play likely had an option tag:

While teams can disguise coverages with different pre-snap looks compared to where they move post-snap, there was no disguise here for the Las Vegas Raiders. They showed 2-high presnap and played 2-man (2 deep safeties with man coverage underneath). Therefore, Pickens knows he’s going to be running a post. 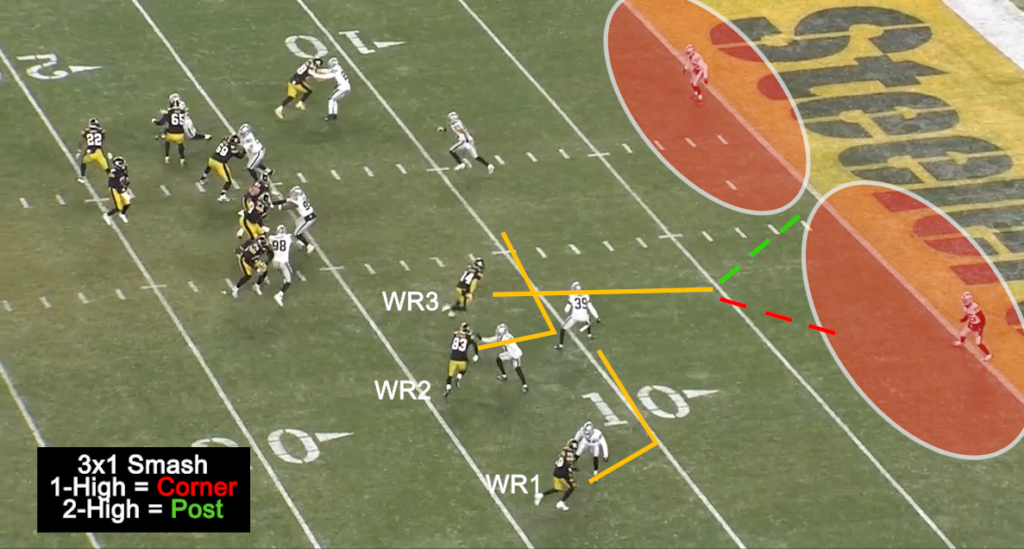 Pickens must have been taking some tips from Johnson. He bends this route outside around the 10-yard line to further expand the defensive back covering him then explodes inside around the five-yard line. The move effectively gave him & Pickett even more room to attack middle the of the field.

Now that we’ve broken down how the play is drawn up, let’s a take look at the play in full.

The quarterback and receiver are on the same page, and Pickett rears back to deliver a strike directly between the two Las Vegas defenders.

The Hall of Fame Quarterback and NFL Network commentator, Kurt Warner, was losing it in the booth (rightfully so) about how the Raiders left the middle of the field wide open. It’s a terrible blunder in coverage during crunch time. Luckily for Pittsburgh, the two budding stars in black and gold were able to take advantage.

State Of Emergency Declared In Haiti After…