Today I wanted to look at situational football for Pittsburgh Steelers quarterback Kenny Pickett in comparison to his NFL peers in the passing game. Pairing this with my Steelers Quarterback Passing Locations, the goal today is to highlight how he has fared his rookie season thus far and perhaps see optimism for improvement the rest of the season.

Let’s start with third and long which I’ve defined as third and seven or longer, using Expected Points Added (the total change in the offense’s Expected Points that came on passes thrown by the player) and Completion Percentage Over Expected, quality data points for the position from nflfastR: 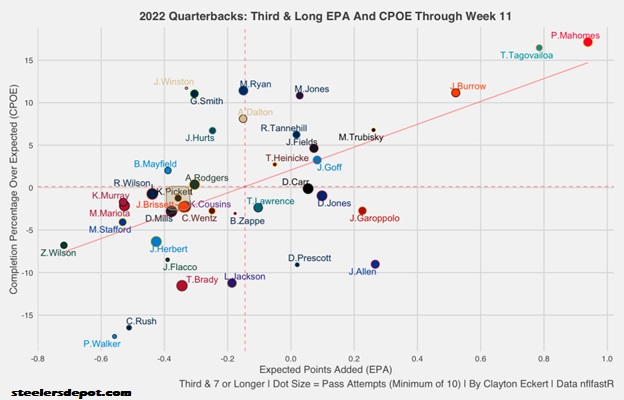 On average Pickett’s stronger result is CPOE as expected, but just below the NFL mean at -1.23 which ranks 20th out of 39 quarterbacks on the graph. His -0.36 average EPA result is well below average, ranking 28th in the NFL on his also below average attempts (37) which ties for 25th. Quarterback Mitch Trubisky also qualifies, and fared well in this regard in his playing time earlier this season. He lands above the mean in both data points on his 20 attempts (T-34th), with a 0.26 EPA and 6.79 CPOE that each ranked in the top ten. It’s also interesting to see how a prior third down study I did this offseason stack up, with Trubisky faring better than Pickett in their final college seasons carrying over to the 2022 NFL season.

To layer more context, let’s look at the EPA results on a weekly basis: 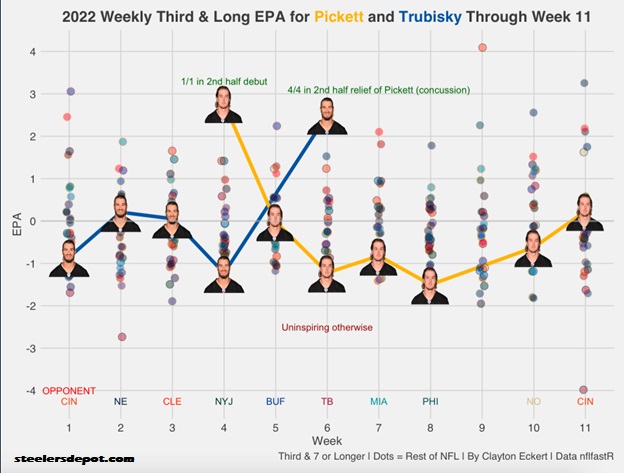 The strongest single game result for Pittsburgh was from Pickett in the week four loss against the Jets (2.78) which was best of the week and the fourth ranked game across the entire chart, but important to note it was on only one attempt in his second half debut following Trubisky’s benching. It was a quality play showing good poise in the pocket and taking a hit as he completed to tight end Pat Freiermuth up the seam just past the sticks, and doubled the nine air yards with quality YAC for an 18-yard gain on third and eight in the fourth quarter. The second-best Steelers game result was from Trubisky (2.5), when he came in for Pickett (concussion) in the second half and went 4/4 on such plays to help hold off the Bucs for the two-point victory. His final pass went for an explosive play as well, which was the only one of the game. This was also the highest mark of week six and the seventh ranked game across the board.

Otherwise, four average results with two for each quarterback, and Trubisky having two well below average results in the season opener against Cincinnati (-0.85) and week four when he was benched his lowest mark (-1.23). Pickett’s had a lull from weeks six-ten after an average result against the Bills, then has trended up since the bye, with last week being his second-best game in this regard against the Bengals (0.23), which ranks third for the team this season. It was the highest volume game by far, not converting at a high rate but included the explosive touchdown to wide receiver George Pickens for the only pass touchdown in the game.

Next I wanted to look at the situation from a yardage perspective, using yards per attempt to see quarterbacks and their passing games have fared compared to the minimum line to gain, along with Adjusted Net Yards per Pass Attempt, which is (Passing Yards – Sack Yards + (20 * Passing TD) – 45 * Interceptions)) / (Passes Attempted + Times Sacked). We know Pickett has struggled with several aspects that the stat measures regardless of situation, and here is how he’s fared on third and long in comparison to the NFL along with completion percentages for the dot sizes as well: 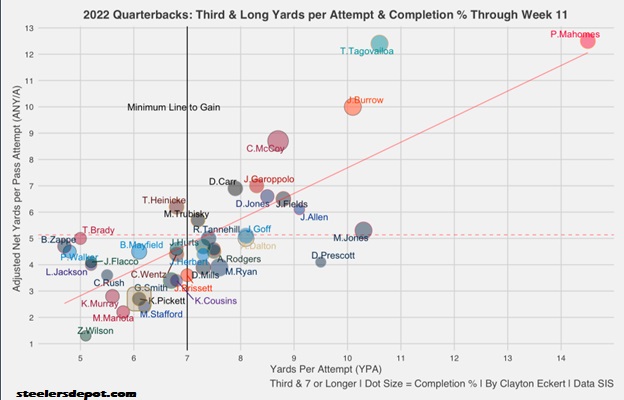 Here we get some great context to the earlier information, starting with Pickett’s 6.1 YPA well below average and tied for 29th in the league, which obviously also means his depth of target has been well short of the chains, with the same ranking. His completion percentage sits at 60.6%, which expectedly is his highest rank of the data points (21st). When factoring in the ANY/A number, which is one of the best singular stats with many important factors for the position and team success, Pickett has an extremely poor 2.7 number that ranks 36th in the situation. He did convert on 4/5 third and longs in the first half last game including the games only passing touchdown, had no interceptions, but one of his two sacks came on third and 12 early in the fourth quarter. Important to note tackle Dan Moore was beat around the edge quickly, so more on him than Pickett. Hopefully some of the positive trends from last game can continue as the study highlights, especially considering a lighter schedule on the horizon.

Now let’s see what the red zone data looks like, starting with the EPA and CPOE view from earlier: 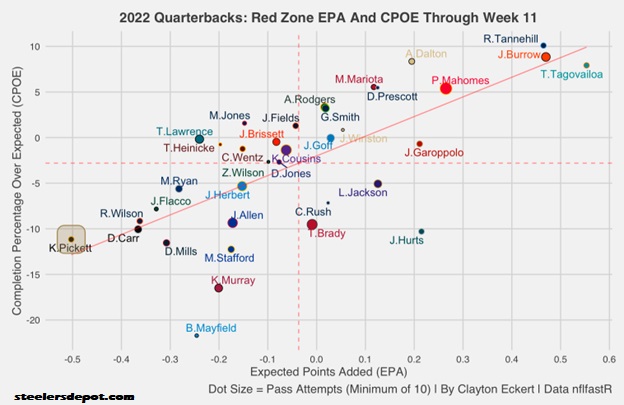 Pickett’s -0.5 EPA in the red zone ranks dead last in the NFL, which is over a tenth of a point lower than any other quarterback with at least 10 pass attempts (36). His -11.06 CPOE is also very poor, ranking 32nd in the league, ouch. He has also had a below average number of opportunities as one would expect for a struggling offense, with 36 passes that ties for 20th.

Here’s a similar weekly view, with the headshot sizes representing number of attempts: 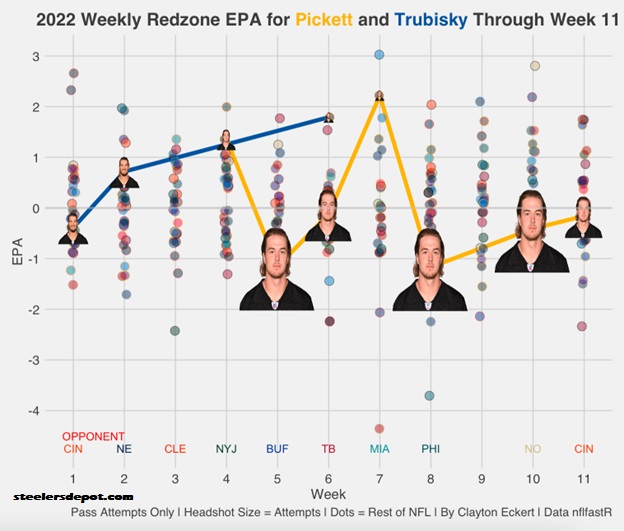 The harder to see headshot sizes on the “mountain tops” highlight the best performances came on a low number of attempts for either quarterback, and Trubisky in general. As Pickett’s opportunities grew the performance suffered, particularly in the week five and eight blowout losses against strong opponents (Bills and Eagles) with eight red zone passes in each. The game against Miami in week seven was his best mark (2.22) on his one opportunity, the great back shoulder touchdown to Pickens for the ten-yard touchdown. The second strongest performance was Trubisky’s pass against the Bucs the previous week, a fourth quarter touchdown to former Pittsburgh wide receiver Chase Claypool. The third best team outing was Pickett’s two opportunities against the Jets (1.36), highlighted by the third and eight play to Freiermuth mentioned earlier that set up Pickett’s second scrambling touchdown of the game. Seeing an upward trend since the bye week as we did with third and long, so hopefully that continues as well as getting above the EPA line with quantity pressing forward.

To close, I wanted to look at accuracy and touchdown averages for quarterbacks on the season, using completion percentages, on target percentage (the number of on target throws divided by total pass attempts with spikes, throwaways, miscommunications, receiver slips, and batted passes at the line of scrimmage removed), and touchdown percentages for the dot sizes: 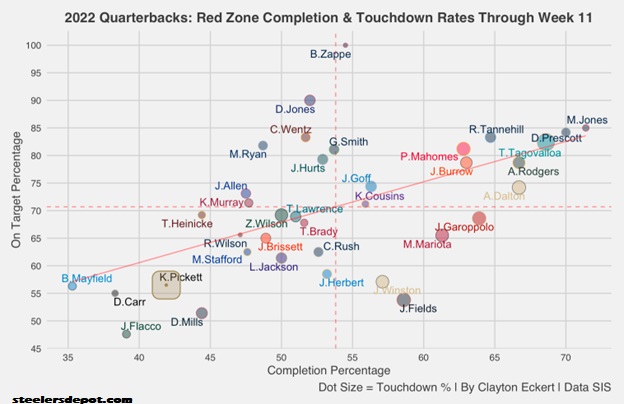 Although Pickett’s overall completion rate has been healthy overall this season (70.3% according to my charting with spikes, throwaways, and bats removed), this visual and the data highlights just how mightily he has struggled in the red zone, starting with a 41.9 completion percentage which is fourth worst in the NFL to date. Jarring difference to say the least. His on target percentage isn’t much better in comparison to his peers, at 56.5% which lands at sixth worst, discouraging with him faring well in this regard in my college studies this offseason. Pair that with his tiny dot that represents touchdown percentage (6.5%) which is the worst in the league by over two percentage points, you get a recipe that is far less appetizing than what you all will hopefully enjoy on Thanksgiving. Here’s to hoping all we have to be thankful for in our lives include an improvement for Pickett and our beloved Steelers down the stretch.

What are your thoughts on the situational data for the 2022 season to date? Thanks for reading, Happy Thanksgiving, and let me know your thoughts in the comments!

What Channel Is the 2023 East-West Shrine Bowl On?